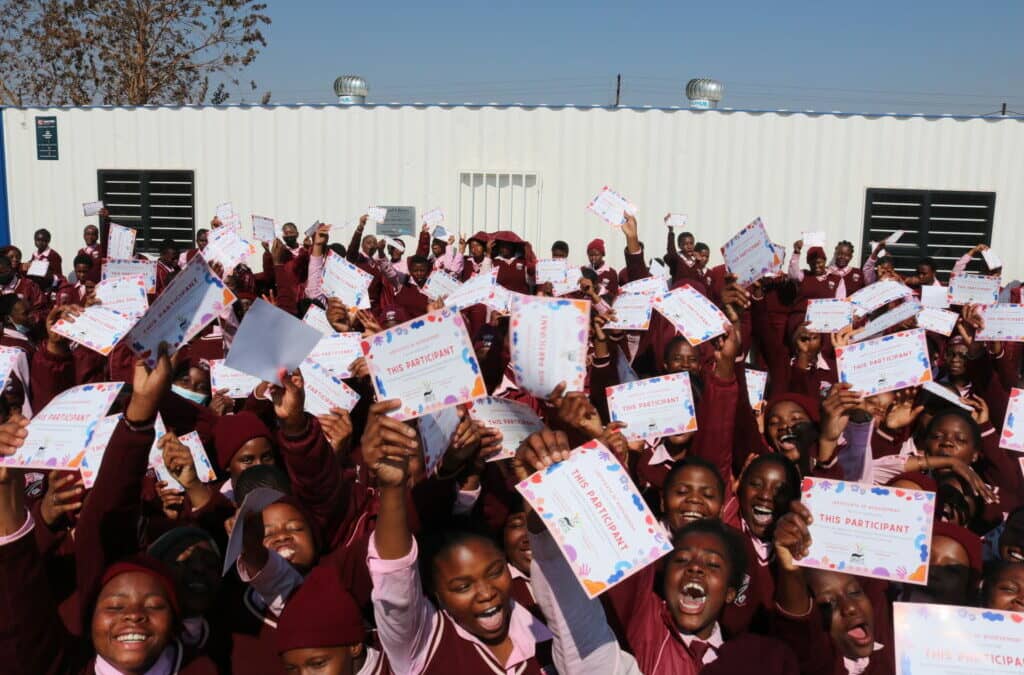 On the 29th of July in support of Discovery, Qrate was tasked with providing another Menstruation workshop to the girls of Tswelopele Secondary School. With the aim of ending period poverty the Discovery Health Period Positivity initiative headed up by the Functional Enablement & Central Services Team, Discovery donated period products to Tswelopele Secondary School. This donation will ensure that periods will not be an obstacle to school girls’ life.

Our facilitators (Candice, Felicia, and Slu) had two sessions on the day. The first session occurred in the morning with 360 girls from Grade 8s and Grade 9s. The juniors engaged really well with the content and asked a lot of questions about different period products. The facilitators were amazed to learn just how excited and confident the juniors were about periods.

Out of the tasks, we asked five girls from both sessions to present period products, and the top presenter received a copy of Flow: The Book About Menstruation co-written by our Founder and Director, Candice Chirwa. The other girls received a menstrual cup from Mina Cups!

We are happy to have worked with Discovery and Mina Cups. Collaboration is key in providing a holistic solution to ending period poverty. If your corporate would like to host a CSI initiative focused on period education, please send an email to info@qrate.org.za!

There is no experience that can be equated to standing in a crowd, screaming at the top of your lungs and collectively marching for a cause. United in anger at the injustice you are facing. Calling for a change.

Womxn have faced oppression from men for hundreds of years. We have been shut down and silenced for so long. But we have had enough. Womxn all over South Africa have taken a stand against Gender-Based Violence (GBV). Womxn have organized protests and shutdowns. Womxn are fighting against the system of oppression. Womxn are revolutionary.

I am a 17-year-old female. The world is a scary place for women and marginalized groups and South Africa’s GBV rate is four times more than the global rate. We, as the youth of South Africa, have decided that we are not going to sit down and watch our sisters get killed. We decided to take a stand.

The morning after Uyinene’s body was discovered my history class had a discussion. We all voiced our anger at the way womxn have been treated and the extreme sorrow we felt over the loss of life. We could all feel the much heavier weight behind this case. Because we have lost so many womxn because of men. And we are tired.

“So, girls, we know this has been happening for too long,” my history teacher said, “but the question is: are we going to sit back and watch this happen? Or are we going to protest?”

Word of the protest got around fast. The next day almost the whole school was on our school’s entrance at break for the protest. We sat with tape over our mouths and listened to girls poetry and speeches and heard their heartbreak. The choir sang. And we all sang along.

The protest lasted for three days. For three days girls held each other and cried. Strangers held strangers. Girls shared their stories and anger at the injustice we have faced. It was like a mass funeral and we grieved for every single womxn that we’ve lost. We supported each other. We were unified. And we were so powerful. I have never felt anything like that amount of power and unity in my life.

And young womxn all over the country did this. They used their voices and shared their anger. And we listened. We took a stand. We led a revolution. It is so important to speak up against injustice, especially in youth spaces. We were born into a world of chaos and we are the ones that are changing it. Listening to the youth take a stand against GBV and being part of the movement is so empowering.

As a young person, it is so frustrating to watch as “people in charge” do nothing to solve the problem. It is so frustrating to see them ignore the issues that are in plain sight. The youth are frustrated and tired and we have decided that if the adults won’t spark a change, we will take matters into our own hands.

It is important to have these discussions amongst the youth because we are fighting for our future and our world. We have to talk to each other and support each other and unite to spark a change. I have felt the power the youth hold as I marched with them and called for a change in one big mass of unity.

I have felt the strength we have as a collective.

And it felt good.

No comments to show.